I recently downloaded and installed the latest versions of PC-BSD http://www.pcbsd.org/ and I have to say I’m extremely impressed. The install went fast (18 minutes), and it was extremely simple and straight forward. I downloaded the 7.02 version using the DVD option. Downloading using http went fairly quickly, I tried to use bit-torrent and there were simply not enough seeders to make it reasonable. During the install you get the option of adding various additional components already on the DVD including Firefox 3.0, Thunderbird, and Open Office 3.0. Based on FreeBSD version 7.0 PC-BSD is stable and secure, the GUI is the new KDE 4.1.2 and I really enjoy it. Installing new apps is far easier and straight forward than Linux in my opinion and I’m comparing it side by side with Kubuntu 8.10 which also uses the new version of KDE.

The secret to improving usability in PC-BSD is the PBI or Push button Installer or PC-BSD Installer. The .pbi extension has all the files needed to install the applications by simply double clicking the file, this is essentially the same as an setup.exe file in Windows or the .DMG file in OSX. The pbi applications can be found at http://pbidir.com/ where an great variety of programs can be had. For more hard core Unix geeks the FreeBSD Ports are also available. FreeBSD Ports are similar to the apt-get found in Linux systems and any FreeBSD Port can be downloaded with all their packages and dependencies to install them in PC-BSD. But for beginners everything you’ll need not on the install DVD will be found at pbi.dir.com site.

The default browser in KDE is Konqueror which is what the Safari browser was originally based on, it’s a very fast browser but I vastly prefer Firefox. Firefox on PC-BSD came with all the plug-ins installed to play you tube video’s and to render most web pages as they were meant to be seen.

PC-BSD seems like the perfect OS for a netbook, it’s lightweight and simple, and has great applications like the  Flock browser available which are perfect for social networking sites and cloud based email. Unfortunately a netbook isn’t in the budget right know  but I’d love to hear from anyone who’s installed it on one.

I’ve tried at least a dozen different Linux distros over the past few years and although they all worked fine, I really feel PC-BSD has surpassed them in ease of use for the  beginner. There were a few issue’s though. Although it runs flawlessly on my desktop, PC-BSD did have a few problems on my Thinkpad R60. The Ati video card isn’t supported for 3D graphics and the proprietary driver available on Linux builds doesn’t work. It also had a issue with my wifi card, although it would connect it never showed better than a 25% signal despite being in the same room as the router. The signal would also occasionally drop out only to reappear shortly afterward. So It’s worth looking through their support page and checking to see if your hardware is supported. If your trying it on a laptop with network cards not supported I’d hold off. It’s main feature is simplicity, but that will go away quickly if your hardware has know issues, in that case Ubuntu or Kubuntu might be a better choice.

Despite the few glitches I still recommend PC-BSD it’s well worth a try especially if your the sort of person who always like to try new Linux builds or are looking for a secure and stable operating system to put on your machine without shelling out for Windows. 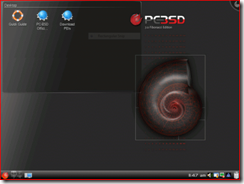 Mark
Born in the fifties grew up in the 80s (sort of).